The payload can be pretty much any text format, with a natural preference for XML and JSON.

A binary response payload is hard to create at the moment - sorry.

The payload Content-Type header is defined in the Response Properties section and it should match the generated response.

XML payload is used for SOAP and XML services. Some content types that have XML as their base format, e.g. HTTP GET for WSDL, will also use XML payload.

The response XQuery has several variables available, including the request and its properties, mock accounts and meta information. See more about variables here.

The response payload can generally be of any text format but the most commonly used is JSON.

The Content-Type of the response is defined in the Response Properties section and this controls how the payload will be interpreted by the client.

The response is sent back as UTF-8 by default and the Content-Type HTTP header is modified to include the charset part:

To use a different charset, provide the charset part in the Content-Type property on the Response page:

Note that in this case the content type should most likely be defined as application/json. 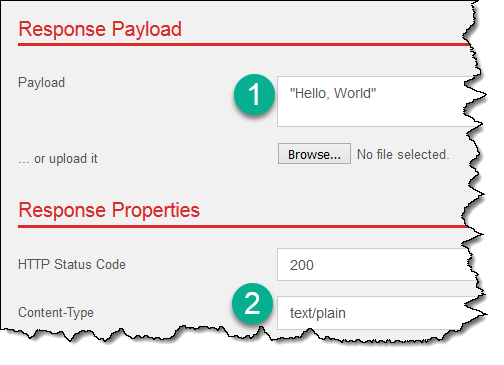 A scripted JSON payload can be created by assigning scripted values to a JSON response payload:

Or, by assigning a Javascript object to the output variable:

A scripted non-JSON response is still a result of a Javascript execution. You need to assign the desired result to the Javascript variable output: